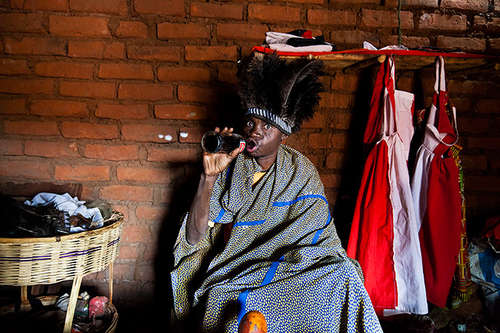 Witchdoctor Arnaldo Rodis, (45), Madamba village, Tete province. The name of his spirit is Manuel. Arnaldo was married to 6 wives and had 9 children from them. He died from malaria in May 2011. (Spiritual ceremony).

*****
In Mozambique, traditional healers in Mozambique both more successful and more popular than professional doctors. Hospitals and medical supplies are not always available in the provinces, and local people have more confidence in the spirits of the underworld, which enter the body of the healers, than in prescriptions from pharmacies. As such, all Mozambican healers are members of AMETRAMO (“Associação dos Médicos Tradicionais de Moçambique” – Association of Traditional Medics of Mozambique), which brings together practitioners from across the country and issues them a license to “doctor” activities.