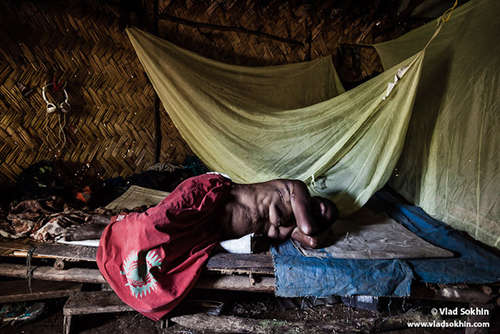 Dini Korul (about 52-54 years old), a victim of superstition-driven violence, lies on the bed in her house in Wormai village, Simbu Province. In May 2011 her son Bobby Korul died at the age of 22 from a stomach infection. After Bobby’s funeral five his friends came to Dini’s house, accusing her of being a sorcerer, who had caused the death of her son. They took her out and dragged through the village to a pigsty, where they set a fire and made red-hot iron bars. Cutting her body with bush knives and burning with hot iron bars they forced her to admit that she was a witch. After numerous refusals they burned her vagina with the red-hot iron and were about to kill her, when women from another village called for help. Dini survived and spent over 10 month in the Kundiawa hospital. Her daughter paid for her treatment more than 900 kina (about 450 dollars) and never received any help from the local authorities. Being expelled from the community forever, Dini had nowhere to go but to her village, where she still lives now. She almost does not leave the house during the daylight, living with a fear that she could be exposed to the brutal “punishment” again.