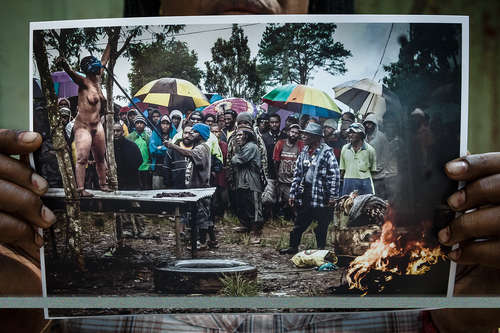 67. A woman advocate shows a photo of the torture of another woman, who was accused of being a sorcerer by people from her village. The torture happened at the beginning of August, 2012, in Southern Highlands Province. The crowd undressed the victim, tied her to a tree, beat her and burned her body with hot iron bars, planning to burn her alive. The violence was interrupted by a group of Catholics and the woman survived. Pictures of the torture were taken by a man from the crowd with a snapshot camera and, at a later date, given to the local Catholic parish and to the photographer. Fearing more violence, the woman in the picture is hiding from her tormentors in another province.